The origin of the name "Urbandale" is not known. The Des Moines neighborhood now known as Beaverdale was originally known as "Urbandale." The railroad/streetcar line owners had acquired 160 acres around the station and subdivided it into a plat called Urbandale on March 6, 1907, and the subsequent development became known as "Urbandale." The original Urbandale neighborhood then adopted the Beaverdale name to distinguish itself from the new Urbandale development.

The city originated primarily as a "streetcar suburb," with a scattering of coal mines also providing employment to some early residents while other miners used the streetcar line to reach the mines. All of the coal mines were shaft mines with entry shafts to individual mines located in the vicinity of what today are Karen Acres Elementary School, 78th Street and Hickman Road, the 4400 block of Merle Hay Road, and 104th Street and Meredith Drive. Most of the mines were closed in the 1930's and the last operating mine was the Beck Mine on Merle Hay Road that closed in 1947.

The streetcar system fueled Urbandale's early growth. Originally intended to be a railroad line continuing northwest to Grimes and beyond to Woodward when it was constructed in 1905, the line was terminated in a turn-around at 70th and Roseland (which is commemorated today by Trolley Park) when the railroad owners encountered difficulties with right of way acquisition beyond Urbandale. The rail line was then converted to a streetcar line that served commuters traveling to work in "the city" (Des Moines), and provided access to medical services, delivered freight and supplies to Urbandale residents, and afforded general transportation before automobiles became commonplace. 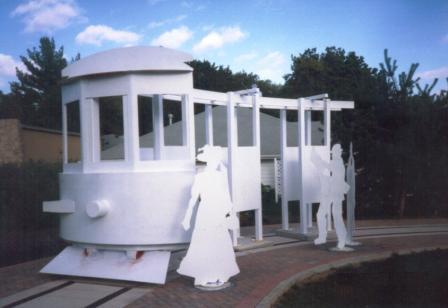 At the height of service, cars ran every 7.5 minutes during rush hour and at 15 minute intervals at other times, from 5 a.m. until midnight. The "Urbandale line" of the Des Moines Railway Company (which became the Des Moines Transit Company in 1949) was the last operating car line in the Des Moines area since it ran along private right of way. Trolley buses gradually replaced other lines running in or along public streets, and with the completion of street construction the Urbandale portion of the "Urbandale line" also ceased operation on June 19, 1950. Operation ceased completely on March 6, 1951.

The Flynn Mansion, located at The Living History Farms, was one of the first homes in Urbandale, although Urbandale did not exist at the time of its construction. This majestic home proclaims the success of Martin Flynn, an early entrepreneur who started as a penniless Irish immigrant carrying water to railroad construction crews. Mr. Flynn had become a wealthy independent contractor by his 30th birthday and constructed this Italianate style mansion, a popular architectural style in the 19th Century, in 1870 overlooking what was countryside at that time. Contrary to some written recollections, the mansion and related barns were not used by the former Flynn Dairy. The home was used for a state prison farm prior to the establishment of Living History Farms, and subsequent renovation by the farms. 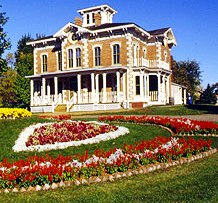 The Olmsted-Urban house located at 4010 70th Street was part of an 80-acre farm when it was constructed in 1904. Now home to the Urbandale Historical Society, it previously housed families who were prominent in Urbandale's history. Clarence and Millard Olmsted were instrumental in the formation of the City of Urbandale and the Urbandale School District, respectively. Harold Gutfreund served on the Urbandale School Board and negotiated the funding for the 1st gymnasium. Karl Urban helped establish the Urbandale Library.

The house is typical of many rural 4-square homes built in the early 20th century, and is being restored to depict the era of the 1920's and early 1930's, before the Age of Automation. A pump organ, wind-up Victrola, and Atwater-Kent radio with the speaker mounted on top are included in the era furnishings, along with collections of books and magazine articles describing all aspects of life in the era, and Urbandale historical memorabilia.

Additional historic information can be obtained from two brief publications written by local residents that are on file at the Urbandale Library. Listening and Learning Urbandale was written by Mae C. Nelson and Around Home, Urbandale was written by Les Hamilton. Both are personal recollections rather than researched, scholarly works and may not be accurate in all respects. The latter is more extensive and detailed. Mr. Hamilton published a local newspaper for a number of years. Some of the following information was obtained from those publications.